Sensei Lou is a native of NYC and has many years of personal experience cross training in multiple martial arts.

One of the reasons, among many, that we bow when we enter the dojo is to pay respect to those who have previously walked the path of martial arts. Sensei literally means, "one who has gone before" The curriculum at Modern Samurai reflects the divergent disciplines of study in which Sensei Lou engaged.

Lou began his martial art journey with Master Kee Young Choi learning Taekwondo. As a drummer / percussionist Sensei Lou found the striking; exercise, conditioning, and flexibility aspects of Taekwondo very attractive, however he wanted to explore other possibilities and avenues of instruction related directly to self-defense.

During a visit to Long Island, Lou noticed Modern Warrior, a very different martial art school founded and led by Phil Messina. Mr. Messina's method of instruction diverged from traditional martial arts instruction, although Phil learned traditional arts delving deeply into Kung Fu. His experience working in a special unit of the N.Y.P.D. decoy squad, led to many discoveries and epiphanies which led to his developing and mastering multiple opponent combat. Over the course of his career at the NYPD Phil arrested over 1100 violent, highly dangerous felons. Sensei Lou spent several years learning from Phil and as an assistant at Modern Warrior. Modern Samurai is named in honor of Phil Messina and Modern Warrior.

While Sensei Lou was enrolled as a student at Modern Warrior, Sensei Joe Villani was a guest instructor who offered an introduction to Aikido. Sensei Lou took this class and later, while still learning at Modern Warrior, engaged in years of private study with Sensei Villani who introduced his life experience involved in Jujustu, Judo, Karate, and Kung Fu. Most importantly during this time, Villani Sensei explained the theory of Kata Bunkai (applications) and why it was so important. Sensei Villani explained that "this will blow your mind" and it did. Sensei Lou was amazed at what had been formally hidden from view regarding kata.

This sent Sensei Lou on another road to discovery. From time to time Sensei Villani would lend Sensei Lou some tapes of martial artists that he thought were particularly influential and important. One was Toshishiro Obata Kaiso, Master swordsman and true "Modern Samurai"

When Sensei Lou opened Modern Samurai he was enrolled at Modern Warrior and during this time started learning Iaido for a few years. While not totally immersed in this art, it was enjoyable and represented Sensei Lou's interest in weapons arts. Lou had been collecting martial arts books and videos; DVD's were not yet invented, and had bought a video of Toshishiro Obata's SHINKENDO.

Sensei Lou showed the Shinkendo video to his Iaido instructor but he thought it was very different from what he was teaching. Nothing else was mentioned but a year or so later that very same Iai group hosted a seminar with Obata Kaiso. Sensei Lou initially declined to attend due to his obligations at Modern Warrior and teaching at Modern Samurai. However he was urged to attend and thus began another path to learning and teaching. Kaiso said, "learn Shinkendo from teaching" – "teach from learning" Obata Kaiso also asked Lou "to help spread" Shinkendo on the east coast of the USA as when he moved to the USA he only had two destinations in mind, New York or Los Angeles. New York had the same weather pattern as Toyko so Mr. Obata chose Los Angeles.

While searching for more information about the karate application paradigm that Sensei Villani introduced to Lou, he contacted Hanshi McCarthy of the IRKRS.

Thus began a long distance learning relationship with Hanshi Patrick McCarthy. Hanshi has visited New York many times and Sensei Lou has hosted Hanshi at Modern Samurai as well as hosting McCarthy Hanshi's IRKRS representatives and attending seminars to learn more about the traditions and applications practices of Karate-Do. 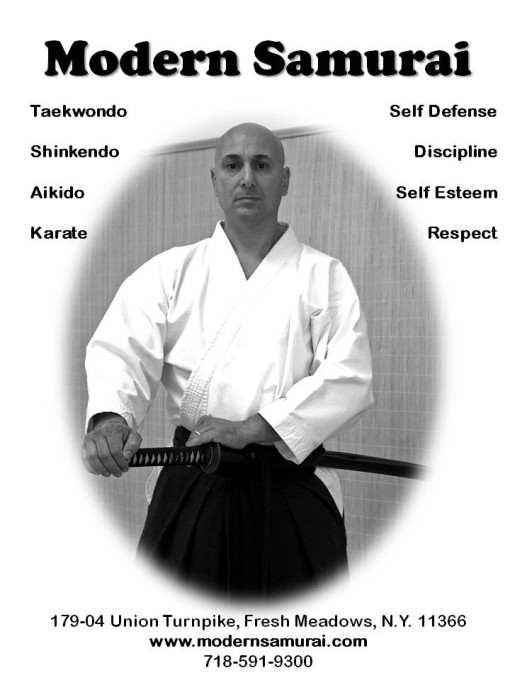