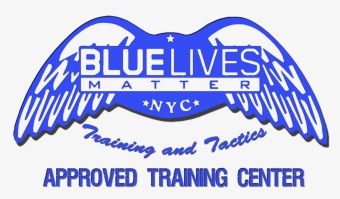 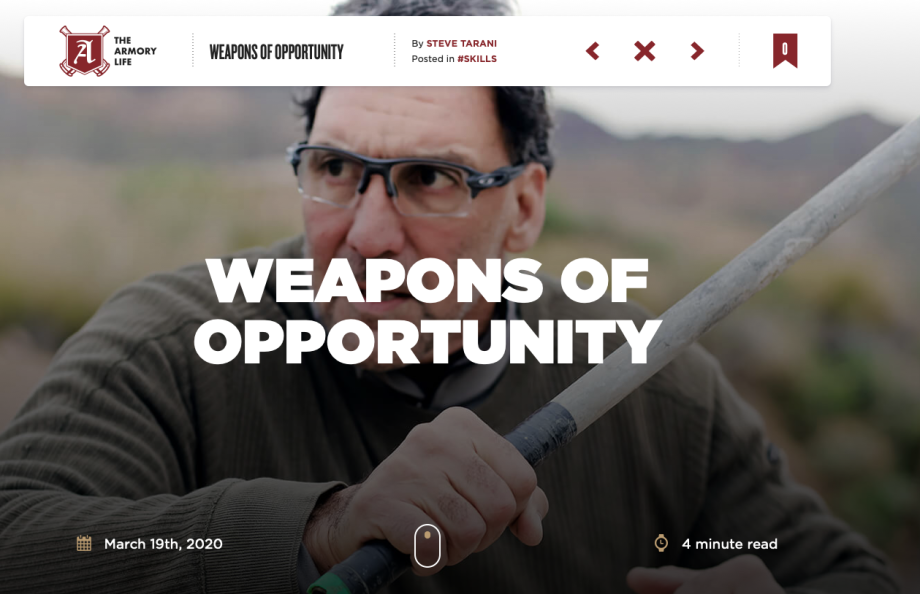 Copy and paste this link to read the article - https://www.thearmorylife.com/weapons-of-opportunity/

Please read this prescient warning below "securing the sanctuary" by Subject Matter Expert Ed Head. I know this genteleman and he is without question one of the finest human beings I have had the pleasure to meet, learn from and have the honor of being called his friend. He continues to be a bright light and mentor to me not only for his accomplishments but his deep rooted humanity and love of life, family and America.
- Sensei Lou 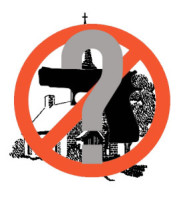 This article was first published on August 8, 2012.

If you worship in a church, mosque, temple or synagogue you should be aware these places are seen as soft targets by psychopathic murderers. Whether politically, religiously or insanely motivated, these people are drawn to what they believe are the easiest of targets, those being places with no effective security and a large, helpless population from which they intend to pile up their terrible score. The recent attack on the Sikh temple is the latest in a series of attacks on places of worship going back as long as there have been established religions and, unfortunately, it won’t be the last. That being the case, what can you do to defend your family and congregation from the next attack?

The first element of any defensive plan is acceptance. You have to believe, and accept as reality, that there are bad people in the world – purely evil people – who may wish to do you and yours harm. Next, you need to accept that an attack could happen at any time. Maybe it never will, but it could happen today, and it has nothing to do with you personally or whether you are  good and devout people; you can’t prevent it by being nice. Having accepted this reality the next step is to develop a security plan, and my suggestion is to implement one that is discreet, effective and provides a layered defense.

If there are police officers or people who are accustomed to carrying concealed firearms in the congregation I suggest they be encouraged to wear their pistols to services. Next, seek out volunteers among this group who would be willing to help with security. The best defense is one that provides layers of security and advance warning of impending threats. The idea is to stop potential attacks as far as possible from the sanctuary. If there is going to be a fight it needs to be contained in the parking lot and prevented from reaching the congregation as a whole. Posting people on the outside, at the door and inside provides for a layered defense. The security team should be able to communicate among themselves and I would suggest bringing local law enforcement in on the conversation. Don’t ask them for permission to defend yourselves, let them know you are going to be doing it and ask for their assistance and cooperation.

It can be very difficult for people of faith to accept the idea that violence and evil must be met with violence. Unfortunately, the results of failing to do so can be horrible. Get your minds right, make a plan and take care of your family and friends.

Editor’s remark regarding the Charleston Church shooting on June 17, 2015:

Yes, it makes me sick, and my heart bleeds for the families of the victims.

There are things, however, that need to be said as the political posturing begins…excuse me, has already begun.

Last season on THE BEST DEFENSE we made the decision to include a church shooting scenario. This was probably the toughest decision we’ve ever made on TBD, and it is one we argued at length. Finally, I, Michael Janich, Michael Seeklander, Marty Hayes, Producer Jeff Murray and DP Brandon Green agreed that including the church scenario was important.

We discussed it with the pastor and his congregation. While the pastor didn’t agree with us, he did agree that the message we wanted to present was important. Frankly, the scenario was disturbing for all of us…after all, we were bringing violence onto holy ground. But we did that scenario, and we all learned from that scenario.

We proved — PROVED BEYOND ANY DOUBT! — that a good guy with a gun, or a good guy willing to fight, are the only antidotes to this evil, this nightmare violence.

I will not go beyond this as of now, but it will covered on next week’s podcast.

Gun-free zones, as the church in Charleston was, are killing grounds for terrorists and the mentally deranged.

Mourn the dead; comfort the living; wake up tomorrow AM and face the Real World. - Michael Bane

Ed Head is a regular on Shooting Gallery and Down Range TV. He has worked for almost 30 years in law enforcement, first in the United States Air Force and then with the United States Border Patrol, retiring as a Field Operations Supervisor. During his Border Patrol career, Ed worked in a variety of patrol, investigative and training capacities.

Ed has an extensive background as a firearms instructor, having trained thousands, ranging from beginners to police, military and special operations personnel. Having taught at Gunsite for 20 years, Ed first trained there under the world famous shooting school’s founder, Jeff Cooper, then later ran the school as the operations manager for more than five years. Ed lives in Chino Valley, Arizona, where he continues to teach and write. 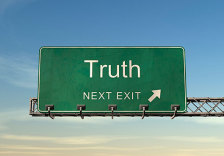 When the prey is armed predators think twice
By Dr. Bohdi Sanders

Warning: A few sentences contain lauguage that may offend and are age inapproppiate for youngsters.

Self Defense Articles Tips and Podcasts 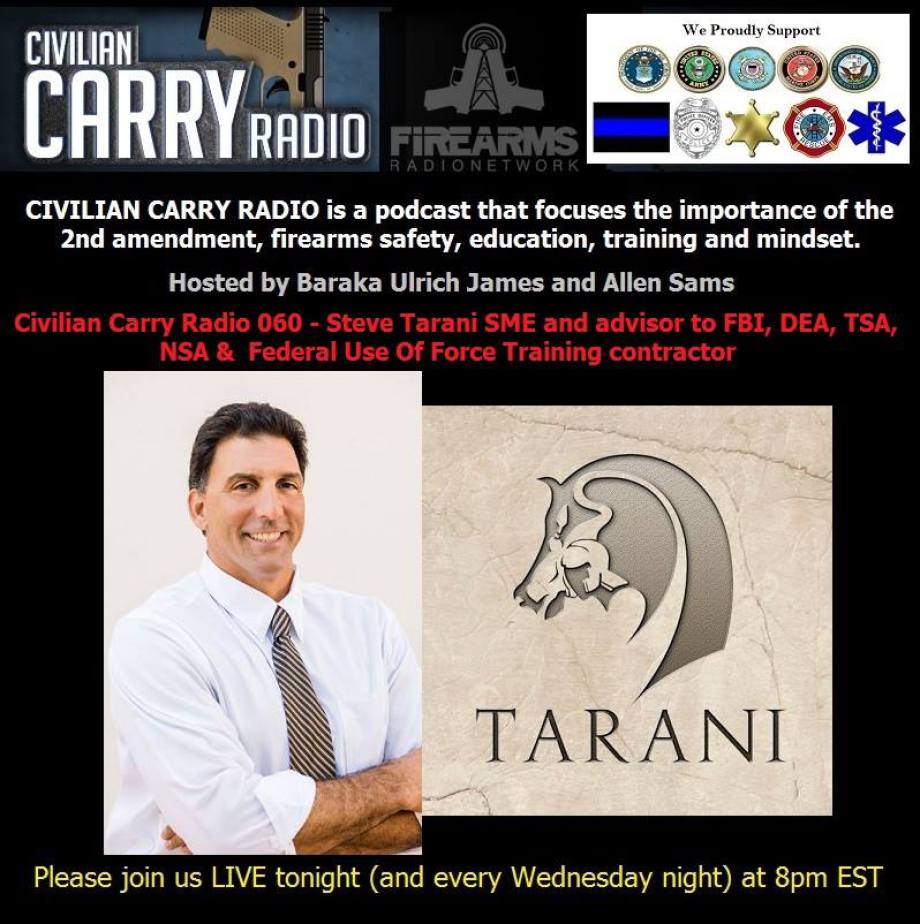 Sensei Lou was a guest host for this show

Tonight’s guest first appeared on our show last year on April 5, 2017 and we are honored and pleased to welcome back: Steve Tarani - SME and advisor to FBI, DEA, TSA, NSA & Federal Use of Force Training contractor

Please join Allen Sams, Baraka Ulrich James with our special guest co-host this evening Louis D'Agostino of Modern Samurai as we present Civilian Carry Radio episode 060 on the Firearms Radio Network with a message from our affiliate contributor and previous guest Andrew Branca ESQ of Law of Self Defense

See you then, thank you!

Below is a podcast interview

Copy and Paste into your browser